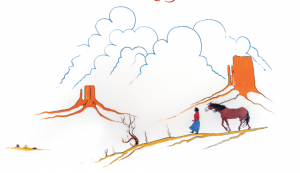 Collected creative works made by students at the Intermountain Indian School shed new light on a dark past.

SEPTEMBER 1967 marked Lorina Steah Antonio’s first month as a student at Intermountain Indian School (IIS) in Brigham City, Utah. A somewhat rebellious 12-year-old, Lorina had attempted to run away from her previous school in Shiprock, Arizona. Unable to return to her family on the reservation in northeastern Arizona, she was sent to an off-reservation boarding school in northern Utah.

Lorina wasn’t alone. Tens of thousands of Navajo youth were relocated from the Navajo reservation and sent to IIS from 1951 to 1974. IIS was integrated and welcomed members of some one hundred tribes during its final decade before closing in 1984.

In many ways Intermountain’s story isn’t unique. Though IIS was historically the largest of the federal Indian boarding schools, thousands of the schools existed in the late nineteenth and mid-twentieth centuries. Much has been said of their purpose (to assimilate and integrate Native American youth into the purported “American culture”) and the horrors associated with that cultural genocide. Thus, such a study leaves many gaps—gaps that faculty members at Brigham Young University, in partnership with peers from many other universities, are working to fill.

“Whenever we repeat colonial histories, what we do, even if we’re critiquing them, is we dehumanize the objects of colonial violence, of colonial pressure,” said Mike Taylor, an assistant professor of English at BYU. “We almost never highlight the resilience of the people suffering under it.”

Taylor, in tandem with associate professor James Swensen of the Department of Comparative Arts & Letters and assistant professor Farina King of Northeastern State University (a BYU alumna and Miss Indian BYU 2006–07), have undertaken a monumental project to do just that—to highlight the resilience, creativity, and ingenuity of Navajo youths who attended IIS during the mid-1900s. Taylor, Swensen, and King have accumulated paintings, drawings, poetry, stories, and other artwork created by students at IIS and have curated the exhibit, Returning Home: Navajo Creative Works from the Intermountain Indian School, 1951–1984, which was hosted by BYU’s Harold B. Lee Library from April to June 2019 and is now traveling to various locations in and around the Navajo Nation, including the Navajo Nation Museum in Window Rock, Arizona.

The exhibit serves as an effort to recontextualize the history of IIS by allowing the creative works of its students to tell the story. For many, including Lorina, the history of Native American boarding schools has long been misrepresented and misunderstood. The art of these students, though, provides glimpses of what life was really like.

“This is the power of rethinking a very traumatic historical moment through the creativity of those who experienced it,” Taylor explained. “It allows people to rethink or to see that their ancestors and their family members are being remembered in a way that is true to who they were, rather than just as victims of an ongoing colonial process.”

A Longing for Home

Even so, life for young Native Americans in the twentieth century was not easy. The institution of Indian residential schools—an effort to “kill the Indian and save the man,” as some professed—separated them from their families and plunged them into a world with a distinctive language, culture, and character. In many of the boarding schools, abuse ran rampant; the efforts to strip the young people from their roots left deep marks.

The artwork that flowed from IIS shows not only creative genius but also the students’ resistance to shedding their identities as Native Americans. Paintings portrayed the desert landscapes from the reservations where they were born; sketches illustrated men atop horseback facing the setting sun; poems were adorned with references to “my country” and “my people.” Though they were distanced from their homes, the artwork showed that the students were unwilling to abandon their cultures.

“They were not just blank slates to be brainwashed, assimilated, and detribalized, to have their connections to home erased,” explained King. “The students revealed their critical thinking and that they were sustaining their ties to home and their homeland.”

Take, for example, Jesse Holiday. As a teenager living in Monument Valley in the 1950s, the absence of local schools for Native Americans meant few options. He attended several boarding schools, went through the Indian Placement Program, and eventually was sent to IIS on the far side of the state in 1958.

Holiday began turning to art as a form of solace, of connecting with home. He learned how to paint and draw. He developed his skills, especially in more traditional Navajo styles. His art, though conceived in the shadow of the Wasatch Mountains, portrayed scenes hundreds of miles away: sandstone towers, horses galloping amidst red rock, bison trotting through desert landscapes. His creativity expressed what he most associated with; the attempted assimilation only deepened his connection to home.

Holiday is one of the many IIS alumni whose work is featured in the Returning Home exhibit. Since a stroke confined him to a wheelchair, Holiday no longer produces art like he once did, but his work continues to reach countless people both inside and outside of his community.

Last year, some sixty years after his time at IIS, Holiday joined King, Taylor, and a group of BYU and Northeastern State graduate students to visit Tse’bii’nidzisgai Elementary School in Monument Valley. He shared his story, and the professors presented some of the creative writing and visual art that was collected for the exhibit.

When King and her colleagues asked the children to draw what they considered to be “home,” in an art exercise, the prompt served as a touching reminder of times when Holiday used the same inspiration to feel a connection to his far-away homeland.

“[The children] were practicing and emulating his art,” recalled King. “We told them about how students like Jesse were far away from home, hundreds of miles away, and these kids could just look out the window.” The children drew their homes then ran to show Holiday their work, seeking his approval.

“It just brought tears to his eyes,” said King. “The kids adored him.”

Curating a traveling exhibit wasn’t the original plan for King, Taylor, and Swensen. King had first heard of IIS and its creative works in 2011 while teaching at Utah Valley University, but she never pursued extensive research until Taylor’s suggestion several years later.

In 2016, Taylor stumbled across a digital archive containing artwork and poetry from the school, and he mentioned the possible research opportunity to one of his classes. That led to Terence Wride, an English major and Native American studies minor, receiving a grant from the Office of Research and Creative Activities (ORCA, now called a HUMGrant) to pursue a more in-depth study of the creative works.

Wride’s research uncovered some 1500 poems from three decades during the school’s operation. When Taylor saw the quality of these works, he knew they needed to be returned to the Navajo people.

“When [Taylor] reached out to me, I could tell he was interested in trying to learn more,” recalled King. “It just happened to be the most ideal time, I think, where you just feel like the lightbulbs all click and an idea sparks.”

As King, Taylor, and Swensen worked to gather creative works from IIS teachers, alumni, and their families; eBay; wherever they could locate the art, the goal of the exhibit remained unchanged: to bring this artwork back to the Navajo Nation so it might be a source of pride and inspiration.

The exhibit, Returning Home: The Art and Poetry of Intermountain Indian School, 1951–1984, made its first public appearance at BYU last spring, but it later traveled to the Gallup Cultural Center in Gallup, New Mexico, and the Navajo Nation Museum in Window Rock, Arizona. After leaving the Navajo Nation, the exhibit will be hosted by Northern Arizona University in Flagstaff, then Utah State University in Logan.

At each location, alumni of IIS and their families have been able to see their creative work recontextualized. The exhibit has brought back memories—some sweet, some dark—of a time when one of these students’ few connections to home was the art they produced. And, for some, it has rekindled intimate connections to loved ones who have since passed on.

Eileen Quintana was in eighth grade when her older brother, Henry Tinhorn, was killed while serving in the Vietnam War. Henry, a former IIS student, had been writing poetry during his time in Brigham City and in Vietnam. Quintana and her family had never seen any of it.

“We didn’t know he was writing,” Quintana said. “I don’t remember him saying anything about his writing, at all.”

In the process of gathering artwork for the exhibit, some of Henry’s poetry was discovered, along with several images of him. Quintana and other family members were invited to the exhibit’s opening at BYU to read some of Henry’s poetry. At first, Quintana was reluctant. She didn’t want to relive the turbulent times she’d spent in a boarding school. But it resulted in an emotional, and positive, day for all involved—Taylor called it the “most powerful experience” he’s had in relation to the project.

“It brought out a lot of emotions,” Quintana recalled. “It was really something.”

Taylor described it as an opportunity to heal, how Quintana’s “seeing the creativity of her brother reminded her of that aspect of his life” rather than the tragedy that cut his life short.

Quintana’s experience isn’t the only evidence that the curators of the exhibit have collected more than art. They’ve provided an opportunity for healing, a recognition of artistic capacity, and a tribute to a  generation that has long been overlooked or forgotten.

“The act of curating is the act of gathering,” Swensen summarized. “We’ve gathered this material, and we need to get out of the way, right? Because it is such good work, it provides a great opportunity for people to see and to come to an understanding of who these people are.”

Samuel Benson is studying sociology and plans to graduate in 2023. He is currently completing an internship with the Opinion Editorial section of the Deseret News. For more about the Returning Home exhibit, visit art.lib.byu .edu/exhibition/returning-home/.