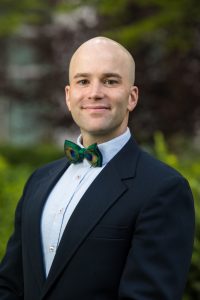 Associate Professor of Arabic and Middle East Medievalist Dr. Kevin Blankinship and his colleagues at the University of Southern Denmark received a large grant from the Independent Research Fund Denmark to fund their research on a selection of influential Middle Eastern medieval literary figures.

PROVO, Utah (February 24, 2020)— The Independent Research Fund Denmark, a well-known grant distributor, awarded Associate Professor Kevin Blankinship with a grant to pursue his research on medieval self-commentary. The Independent Research Fund Denmark will sponsor Professor Blankinship and the project’s primary investigator Aglae Pizzone as a part of their initiative to “… ensure that new knowledge of the highest scientific quality is created and spread in society and is effective nationally as well as internationally.”

Ma’arri, an 11th century Syrian poet and the subject of Professor Blankinship’s research, serves as a compelling literary figure to unravel. In his day, Ma’arri was both a renowned poet and controversial figure. He held harshly critical views of the medieval Muslim society of which he was a member and lived an austere lifestyle motivated by his religious fervor. Professor Blankinship notes that Ma’arri’s self-commentary “raises interesting issues, because normally commentary is a secondary thing that someone else does. The fact that someone might be commenting on his or her own works brings up questions about authority to interpret. But it also raises another question along with that, the question of what we might call subjectivity.”

The grant will fund Blankinship in his continued research on Ma’arri’s self-commentaries while he lives in Denmark and works on his projects at the University of Southern Denmark (SDU) in fall 2020. Professor Blankinship and Professor Aglae Pizzone will be working on digitizing the original handmade manuscripts of works written by their literary figures of interest. Additionally, they will be co-authoring an article on medieval self-commentary by controversial literary figures and will be contributors to a volume of essays focused on medieval self-commentaries. Professor Blankinship also intends to produce an in-depth article about Ma’arri.

This research grant signifies a milestone in Professor Blankinship’s career; it is the largest research grant he has yet received. Professor Blankinship’s research on Middle Eastern medieval literature has led him to Denmark in the past, where he studied the subject at the Royal Library at Copenhagen. Earlier in his academic career, Blankinship also received a Fulbright-Hays Doctorate Dissertation Research Award (DDRA) for his research on how Ma’arri’s works were received across the Middle East, which allowed him to work in Morocco.